The Big Bang Theory is brilliant. Some seriously great writing. This is probably my all-time favourite quote, about Sheldon’s obsession with labelling stuff. I have the same obsession. Back when I was little we had one of those embossing labellers, and I would painstakingly rotate the wheel for hours, labelling my crayons green, or blue, despite the fact that adding a label clearly didn’t really add anything to my ability to discern the green crayon from the blue. It broke eventually, probably through exhaustion, but ever since I’ve kind of thought I’d love to buy myself a new one.

This has always been one of those things I’ve kept to myself. A slightly grubby secret, like the fact that I actually like chicken flavour Supernoodles. Bad, right? However, in having a squizz around the blogosphere, particularly blogs of the crafty type, not only has my love of crafts been resurfacing in a big way, but I realised that I am actually not alone in my label-obsession. In fact, if the number of blog posts about loving labelmakers is anything to go by, not only is it now socially acceptable, it’s practically en vogue.

I spent a good hour or so lusting after the beautifully organised wardrobes, kitchen pantries and filing systems. I especially loved Liberty London Girl’s attempt to label her sausage dog which proved unsuccessful.  I then realised it was in fact payday and I could treat myself to one! Cue another hour searching the web for the best deals.

I finally plumped for a Dymo Label Manager from Amazon, because it’s a USB plug and play device, so I can use the keyboard on my laptop rather than some fiddly buttons, and I can use any font on my computer, as well as small graphics. At £33 including a black on white tape, it was a decent deal. It is definitely easier to operate than the old school dymo wheels! You literally plug it in to your USB, a pop up screen opens the software, you type, you click print, you press cut on the machine, and out pops a perfectly-sized label. Amazing. Here she is in all her glory: 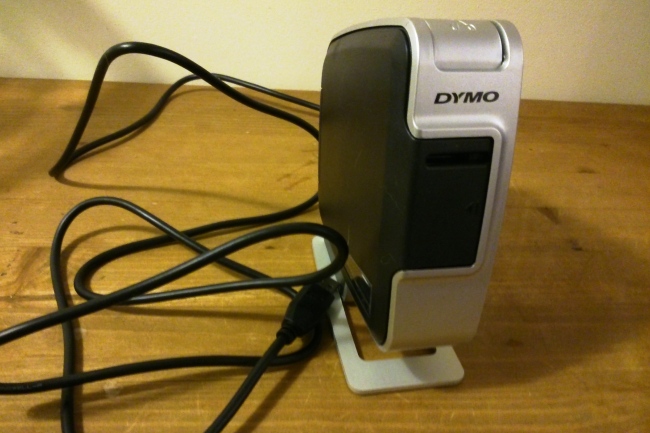 My first task was my spice rack. I made this a couple of years ago from an old ammunition case I found languishing in a shed on my parents’ farm, cleaning it up, sanding down and waxing and adding some shelves, and then bought a job lot of jars on eBay for my huge herb and spice collection.

Labelling them was a bit of a pain though, and in the end I opted for chalkboard pen. This lasted a year, but had pretty much rubbed off recently, which didn’t bother me too much as I can generally tell what I’m cooking with by smell, but was rather confusing my housemates who don’t cook quite so often.

I spent an hour excitedly labelling jars and was over the moon with the results. 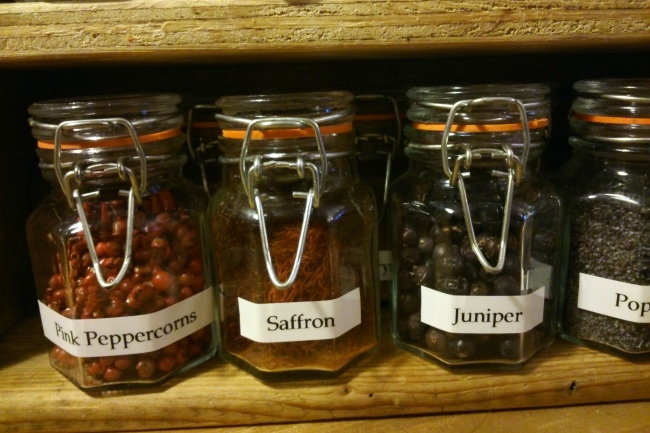 I also thought up some recipes for the more unloved items which had been hiding at the back. Now even my flatmates can tell their cumin from the coriander and their jerk from their juniper! (Yes, I cheat and use ready-made jerk seasoning sometimes.)

Next stop was the ingredients’ cupboard. One day I’d like to have all matching jars, but for now I kind of like the mismatch!

Finally baking ingredients, and no more mixing up my flours! 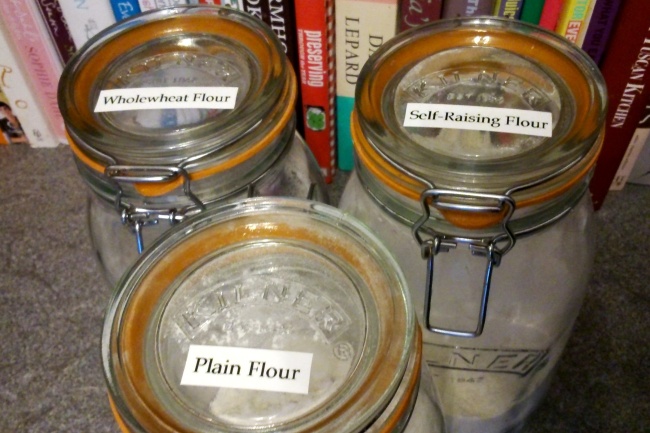 I was half way through printing labels for my sugars when the 3m tape (which I had thought would be plenty), ran out, leaving me with “Caster Sugar” and some “Granulat”. I will have to wait until my refill tape arrives on Monday to continue my label-fest, which is probably just as well. The hiatus stopped me labelling everything in the house. I tried the dog label too, but the “pug” sticker just wouldn’t adhere to the pug, and Billy got very upset when I tried to stick it on him instead!

A couple of hours later, I opened the fridge to find this on a carton of milk:

It seems even my boyfriend is realising how useful a label maker can be!

I intend to label all the plugs in the house, so no more unplugging the wrong thing, as well as the ends of USB cables so they’re easily identified. My filing system is going to get an overhaul too, and I might actually organise my rack of PhD notes too! I’ve also got ideas for numerous craft projects to do, especially some greetings cards which I’ve seen on Pinterest.

If you too are a neat-freak or into crafts, you need one of these things in your life.

Buy now. You will not regret it…..your dog might.

All suggestions for other things for me to label will be gratefully appreciated, by me and my pets.

12 thoughts on “The Merits of Labelling Your Life!”