The sun is shining and the weather is sweet, and it makes me want to be out in the garden making it look beautiful! Lately we’ve been collecting pallets wherever we spot them with the intention of doing ‘useful things’ with them, but so far they’ve mainly just been used to prop our chairs up on to reach our too-high cable drum table, which we’re in the process of lowering (post on that when we’re done)!

Yesterday I decided the time had come to breathe new life into one of them, and pretty up the garden with some colour at the same time. I chose a fairly sturdy one with substantial sides because I wanted the wood to be part of the feature. I’d seen loads of pallet garden ideas on Pinterest, so I decided to make my own version. Here’s the story of how I did it, which I’m bringing to the Sunday DIY Showcase hosted by Marie at the Interior Frugalista along with Jennifer, Shelly, Megin, Katie and Erin. This is my first time joining you all – very exciting and thank you for having me! I hope over the next few months to have more time to do DIY and craft projects (which right now are stacking up in the garage waiting for some attention) once my PhD is finally over (if that ever happens, it seems every time I get close I am just as far away again!), and I’ll be sure to share them too.

So, here it is, my DIY pallet garden tutorial!

First of all, select a strong pallet, preferably one which has not been treated with all sorts of nasties (particularly important for indoor pallet projects, but still something to keep in mind for outdoor ones). I chose this beast:

There’s some damage to the bottom front slat, but I was hoping once filled with plants it won’t be so noticeable, and indeed, in the ‘after’ pics you can hardly tell.

Then I found a smaller one and pulled it apart for the slats of wood. You can also use shop-bought timber in the width of your pallet, but I had these lying around and I prefer to re-use things when I can. You do need some muscle for this step, and a mallet and wedge are useful too. There are plenty of tutorials on how to take a pallet apart on the internet, so I won’t replicate them here, but essentially, find a join, stick the wedge in, hammer it in, then pull with all your might and lever the nails out, then carefully tap them through with a smaller hammer to remove.

I cut six pieces of wood that were an inch longer either side than the gap in each side of my pallet, to form the bottom of the planting boxes. I then took some small nails, turned the pallet upside down, and hammered in a couple of nails on either side of the plank, fixing them securely. 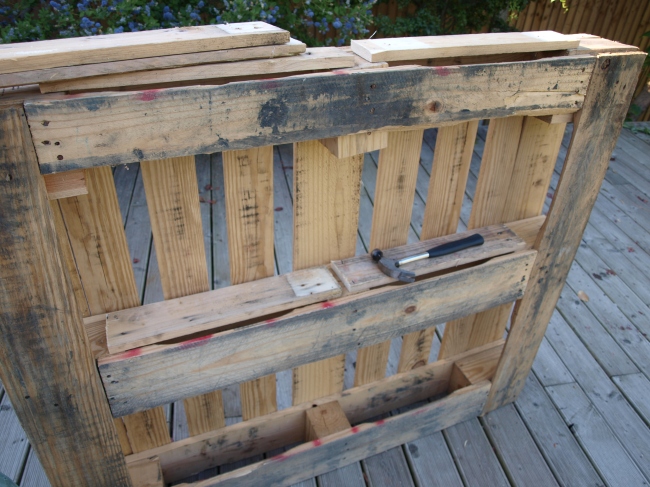 And here you can see them all secured: 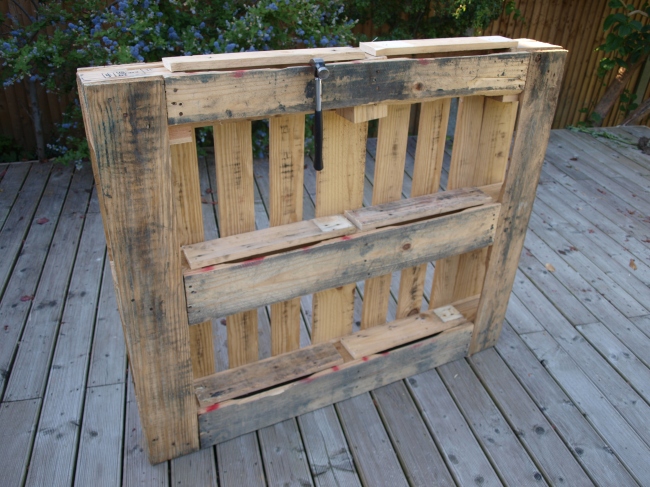 Once turned over, there were six neat little planters in my pallet. (Sorry for the photos, I did this project after supper and the light was fading fast!)

Next it was time for a coat of something to seal the wood, but also to pretty it up a little. I wanted a pale green shade to blend in with the garden and I wanted only to stain the wood rather than paint it, in order to let the grain and the flaws and the factory stamps and even pen scrawls show through, because I think they add to the charm of using re-purposed wood. I chose Cuprinol Shades in Willow, which cost £10 for a litre. One coat of stain (which is all you need) used just under a third of the can, so there is plenty left for another project, and it makes it a little more cost effective. Unlike paint, you really have to work a stain in, because as you put it on it soaks in very quickly, so I had to put in a fair bit of effort with the paintbrush, spreading the stain as much as I could. The effort was worth it though, I think the end result is really attractive, and a far better finish than the flat effect you would get with paint. I love the colour too.

Once stained I put the plastic cover from the other pallet I dismantled to good use, lining each planter and stapling the plastic in place with a staplegun (I love that Ste has all these gadgets at my disposal! He’s a very useful man to have around.) just to prevent soil from falling through the small gaps and to enable some water to be caught to keep the soil moist enough for the plants to thrive.

Once this was done, I started filling each one with a deep layer of compost, and then a combination of my plants of choice. These were whatever Homebase had that afternoon when I visited, but I wanted a combination of flowers and trailing plants to ensure it looks nice both now and also in the winter. I chose English Ivy and trailing Lobelia for that purpose, the latter being on sale at £1 because the flowers were almost over, but it still looks pretty and fills in the greenery beautifully. The Ivy will look good most of the year, I just have to keep it in check. Then I added some colourful petunias and a lovely white chrysanthemum. One day those will have to find a new home because I suspect they will grow too tall, but for now they look beautiful. The plants cost me £16 in total.

I love how it turned out and I was really excited about taking photos straight away, but by that time it was dark so I had to wait until this morning. I actually dreamt last night that I woke up and all the lobelia had gone brown and died (maybe the least odd dream I’ve ever had!) but happily not! They are still lovely!

The whole project cost me around £20, and I think is a lovely addition to a blank wall in our garden which needed jazzing up. I love the faded-effect of the stain, and I’m really pleased with it for a couple of hours’ work! What do you think? 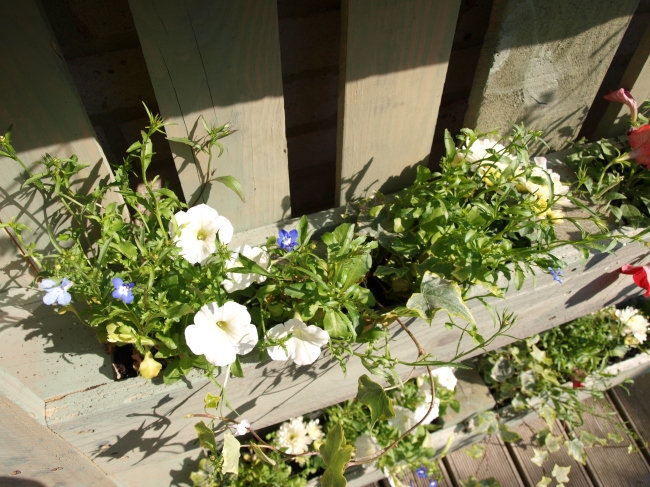 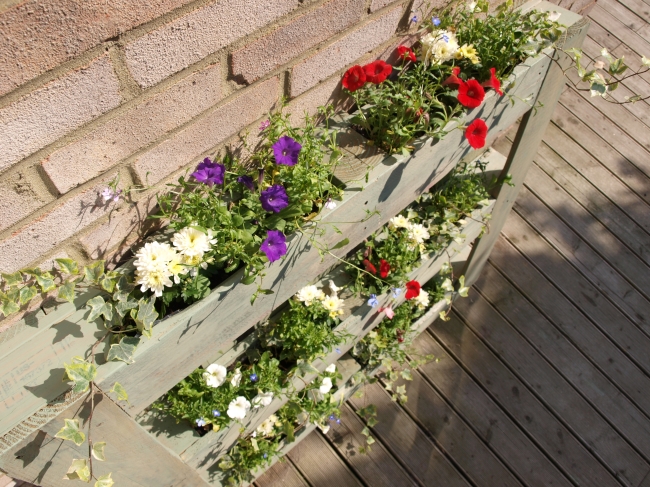 Totally thrilled that the lovely Jen at PinkWhen was kind enough to feature this as her pick of the week for the DIY Sunday Showcase. This is my first time being featured ever, so I am kind of over the moon! Thanks Jen! And thanks to all of you DIY Sunday Showcase participants, I was inspired by so many of your posts – I just need more hours in the day now to put some of them into action!